As part of the 30th edition of the Marseille International Film Festival, the IDEM Collective is offering you an unprecedented screening in France of "So Pretty", free adaptation of the storyline "and when the prince danced with the coachman, they were so pretty that the whole court faltered.”. A utopian film by German Ronald M. Schernikau.

The original text was intended as a sketch for a comic strip that Ronald M. Schernikau wanted to write with Berlin artist Thomas Schulz. In the end, the project did not materialize. However, decades later, Jessie Jeffrey Dunn Rovinelli saved this highly scenic work, and made it the screenplay for her film about love in the 21st century.

Schernikau's semi-biographical romantic drama, set in West Berlin in the 1980s, is here transposed to 2018 New York, but that's not the only significant change we notice in this non-academic adaptation of the novel. The hero is no longer called Tonio but Tonia. The two multi-loving gay couples in the book are now members of a small transgender community. Thus, the exploration and homosexual liberation which was the axis of the original text has been replaced by a new current battle: that which wants to eradicate the binary division of the sexes of human beings.

This fiction filmed in Super 16mm is a compilation of scenes from everyday life shared by this community. Dunn Rovinelli offers us the portrait of a generation, this transgender youth with which she identifies by bringing together moments, as fleeting as they are eternal, of her walks, conversations, lunches, sexual practices and night-time escapes in discotheque, as well as of its presence at political demonstrations or in favor of LGTBI + collectives.

This (practically documentary) anthology on this community is presented alternately with the reading of passages from Schernikau's novel, the content of which coincides with the crises and revelations that the heroes of the film experience when practicing free love. 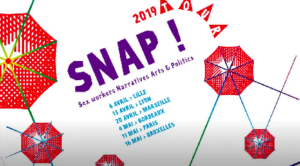 WITH THE SUPPORT OF
Menu